This contract is based on surviving period guild documents by Casa dos Vinte e Quatro (House of Twenty Four) in Portugal, and other Portuguese contemporary indentures. The Casa dos Vinte e Quatro was created by the future Dom João I in 1383 to confer administrative power to the guilds of Portugal. Its name derives from the organization within the entity: each of the 12 corporações de ofício (guilds) had two representatives on the board. Over time, there was a fluctuation on the number of chairs and guilds according to the political and economical influence of each occupation. In 1875, a fire destroyed most of the archives housed at its headquarters, including original contracts, and most of the surviving documents refer to rules and regulations within each guild.

Each corporação symbolized a patron saint, and included a main occupation and associated crafts. The corporação headed by tailors was called Nossa Senhora de Candeias (one of the Portuguese titles for the Virgin Mary), and included clothing merchants, hat makers, and scabbard makers. As this guild would have overseen my persona’s apprenticeship in Portugal, the word Candeias was added to the center of the indenture contract.

After talking extensively about our relationship, Mistress Vienna and I decided to formalize a peer-apprentice bond. However, due to external factors, we had one week between our agreement and the day the apprenticeship ceremony was to take place. I knew I wanted to sign an apprenticeship contract but there wasn’t enough time to draft the agreement and commission a scribe to write the document.

My solution was to learn calligraphy and write the contract myself. As I had previously intended to learn the scribal arts, I owned most of the materials necessary to craft the contract. Armed with a copy of the book  “Medieval Calligraphy: Its History and Technique” by Marc Drogin, I found a style that felt comfortable to my left hand and practiced for a day before starting work on the document.

The contract was written in two copies, in both Portuguese and English. After the calligraphy was completed for the four sections, I added the center design between the two copies where the contract was to be cut. As mentioned previously, the word Candeias was transferred in decorative letters using carbon paper and painted with gouache.

The contract was signed by Mistress Vienna, myself, Queen Honig I and King Ioannes I at the Barony of An Dubhaigeainn, AS LII.

The body of the apprenticeship contract in Portuguese:

The translation of the apprenticeship contract in English:

This indenture made the sixteenth day of September Anno Societatis LII in the Barony of An Dubhaigeainn witnesseth to all in the East Kingdom, her allies and beyond her borders, that Lady Aurelia d’Alcaçova does bind herself to Mistress Vienna de la Mer after the manner of an apprentice to learn her noble art of embroidery and tailoring and to serve her Mistress in the ways judged necessary for as long as it is beneficial to both of them, or until she is named Mistress herself. Aurelia gives faith of presenting items very well made and adorned according to the instructions of said Mistress and practices of the craft. The goods of her Mistress she shall not waste, nor the same without license of her to any give or lend. Hurt to her said Mistress she shall not do, cause or procure to be done, nor from her Mistress’s business absent herself but in all things shall behave herself as a faithful apprentice ought to do. Mistress Vienna gives faith in teaching the secrets of the craft of embroidery as well as the works of the clothes she makes and to give Aurelia good conditions and guidance to practice her craft and grow skill. In witness whereof the parties aforesaid to these indentures their hands interchangeably have set their signatures. 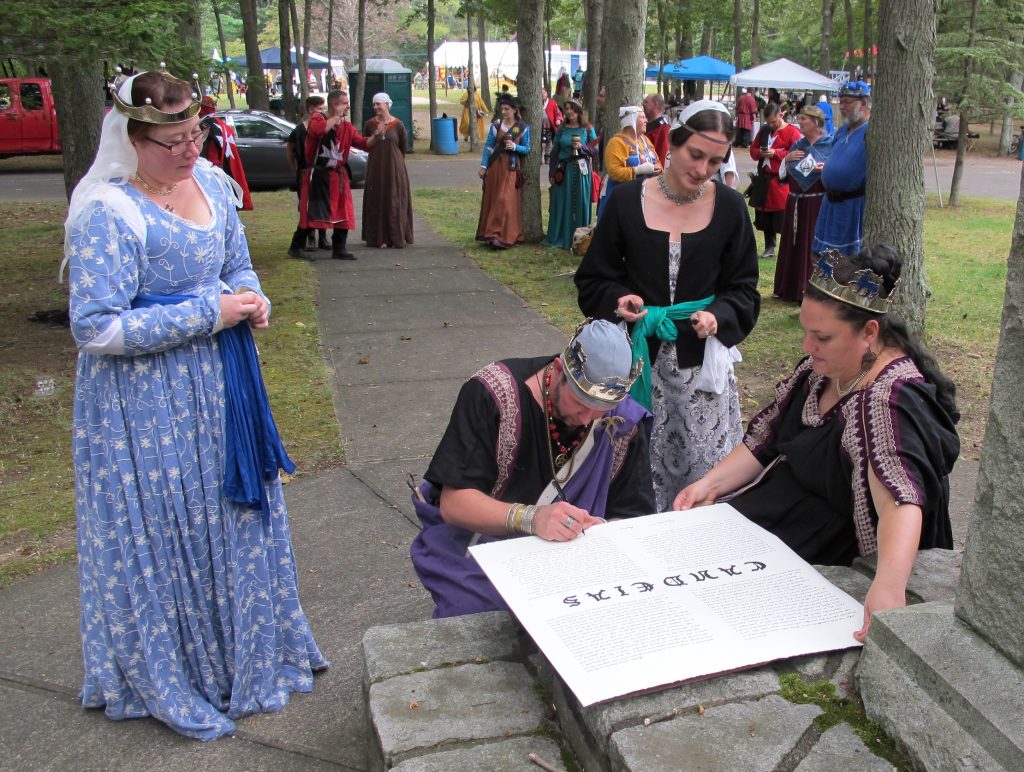 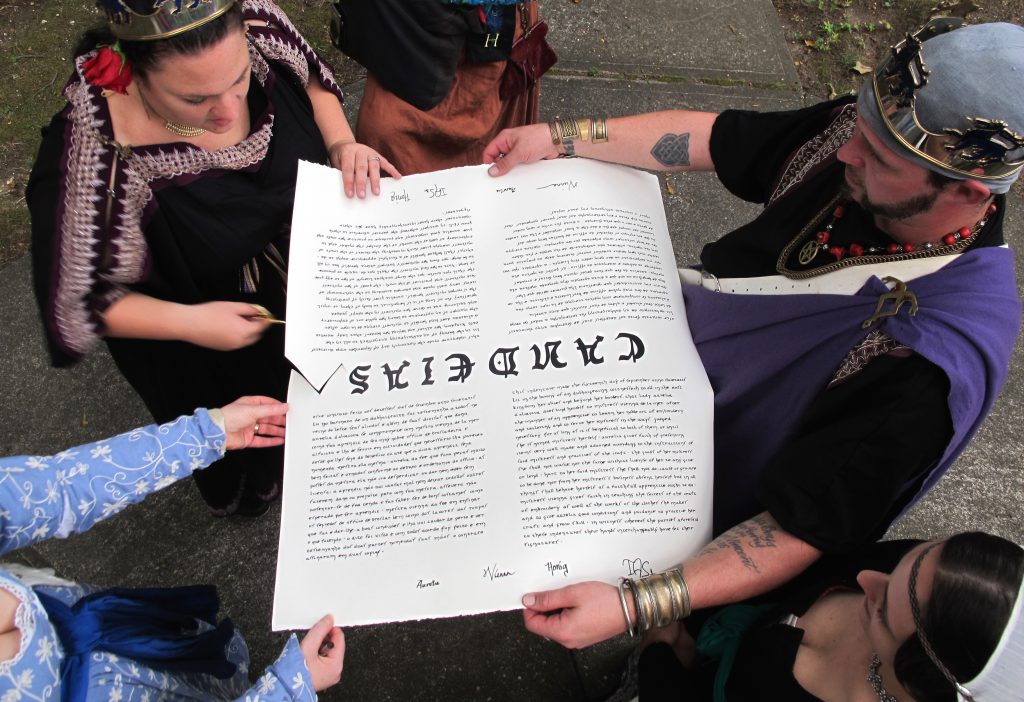 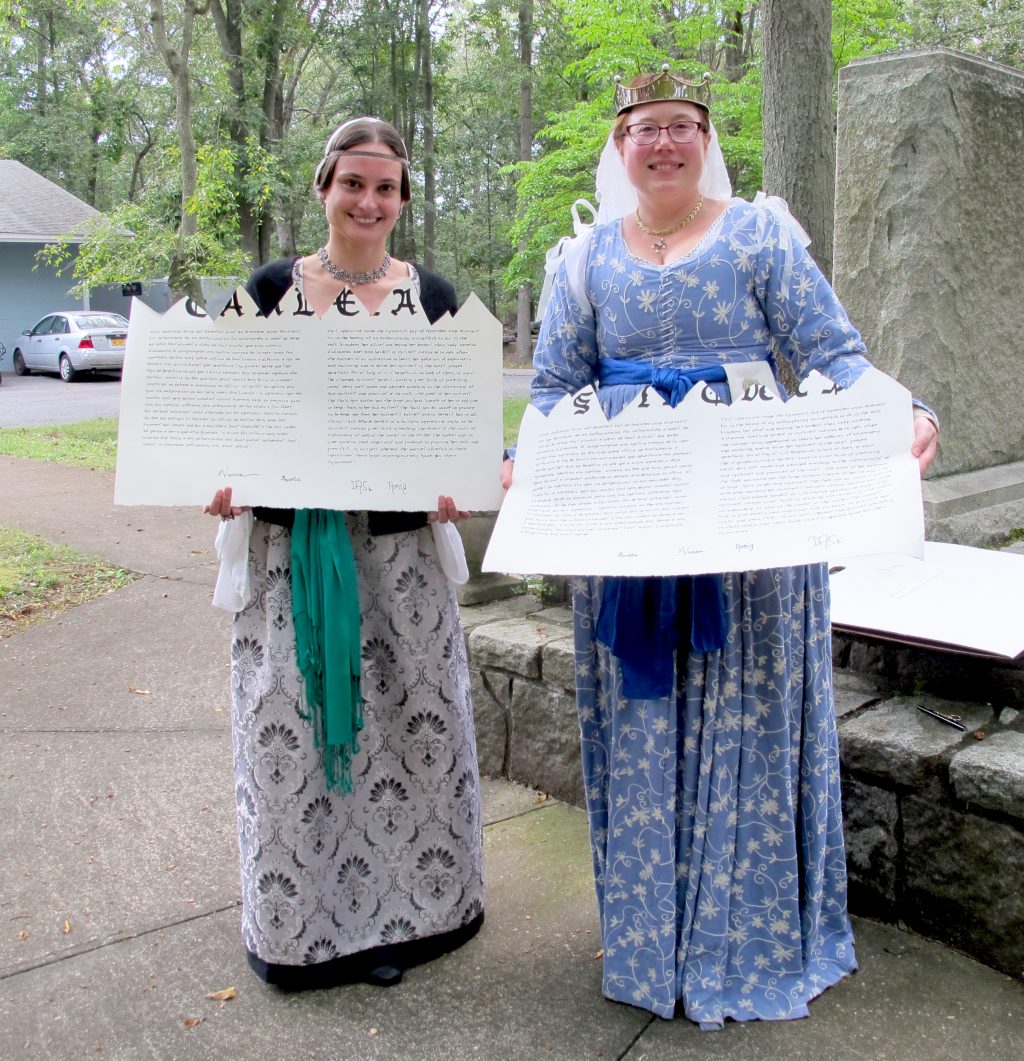 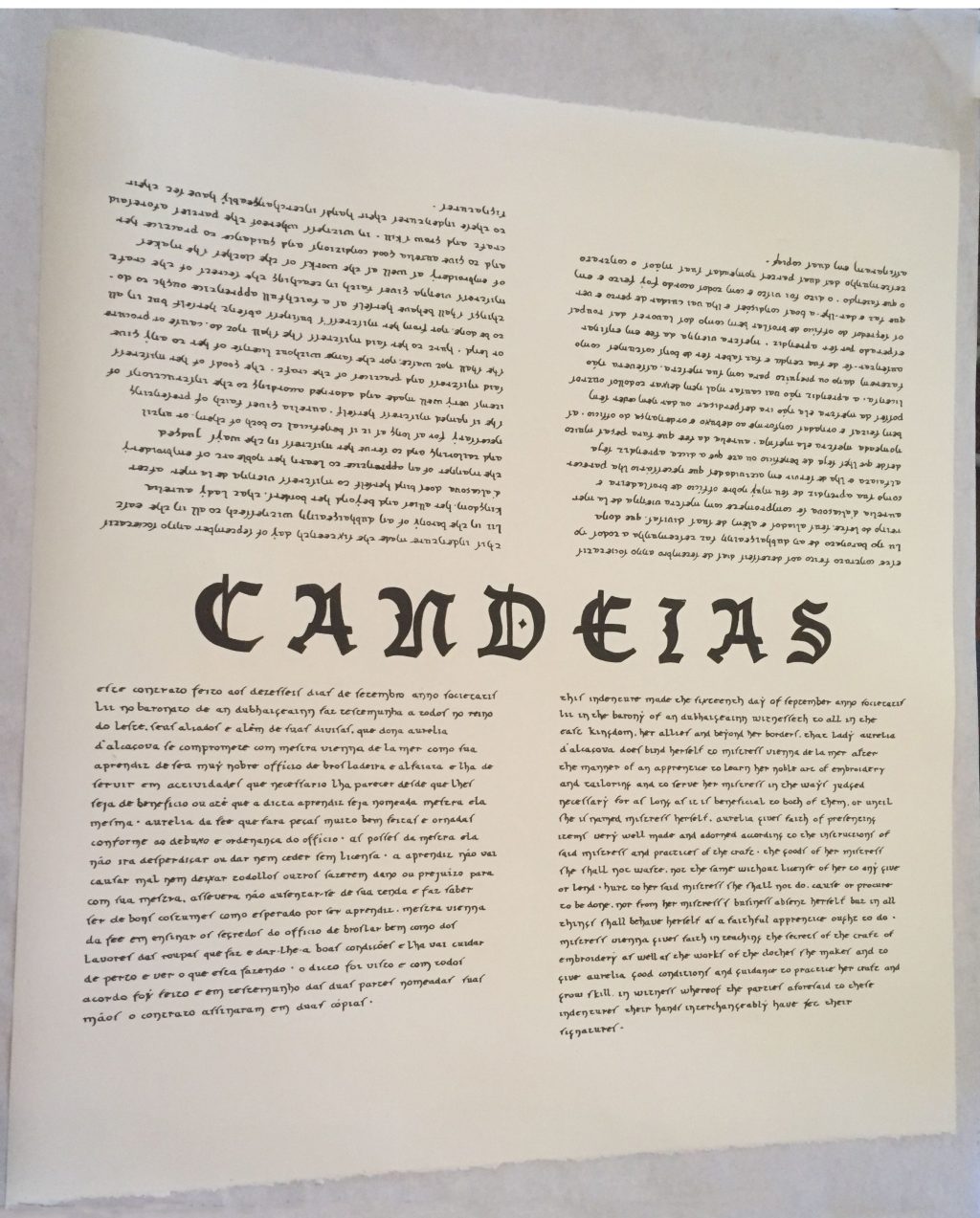 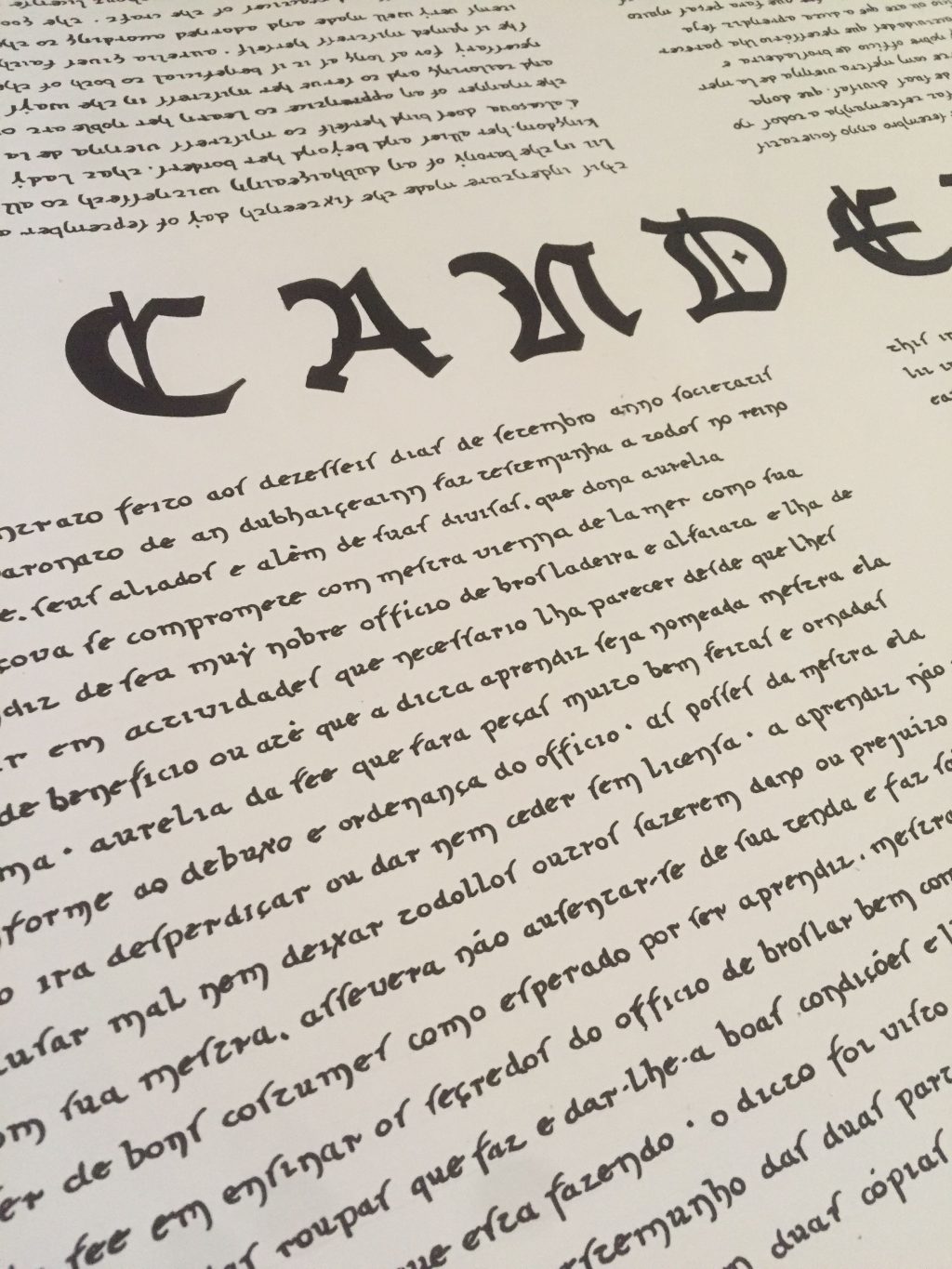 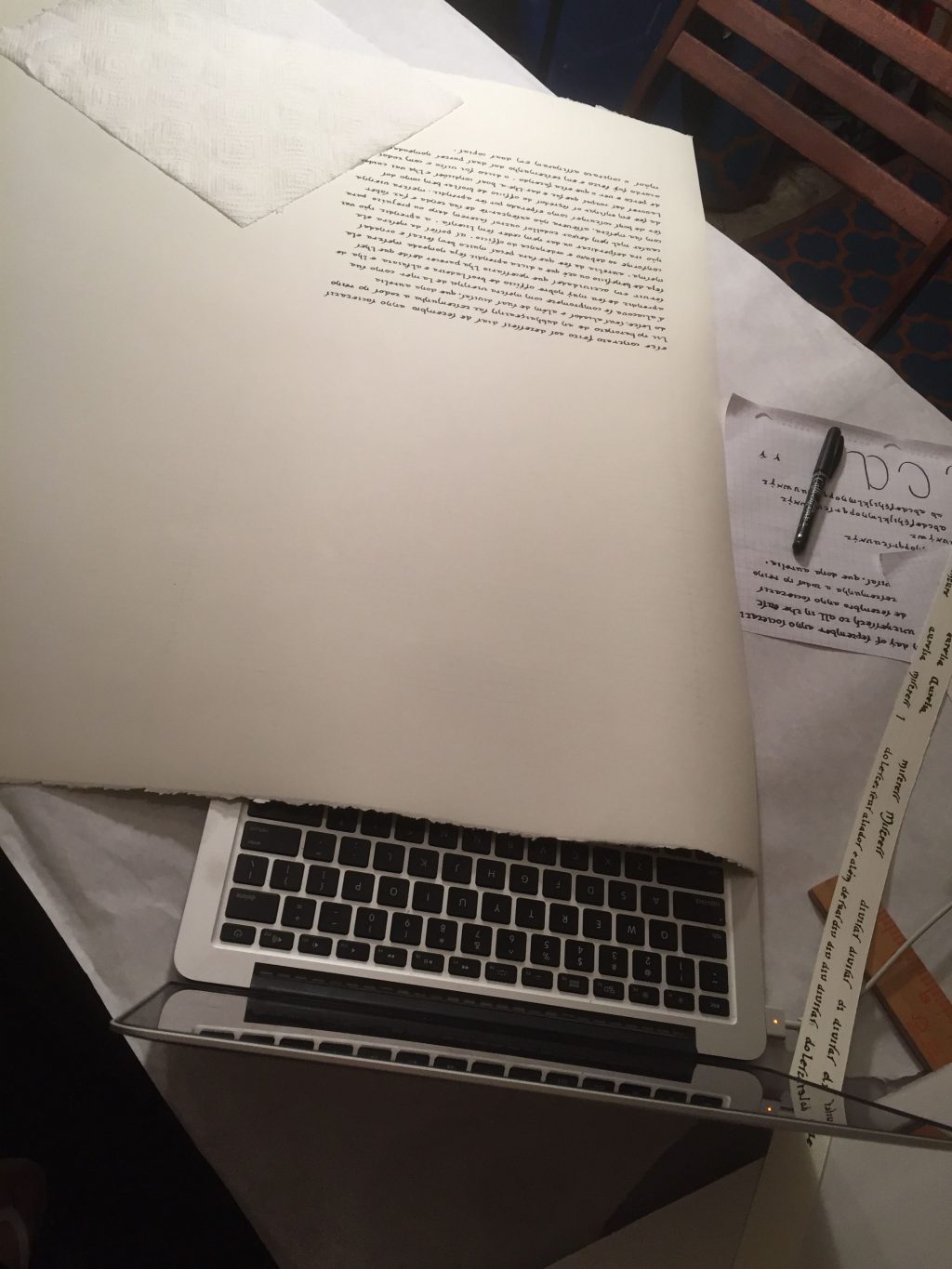 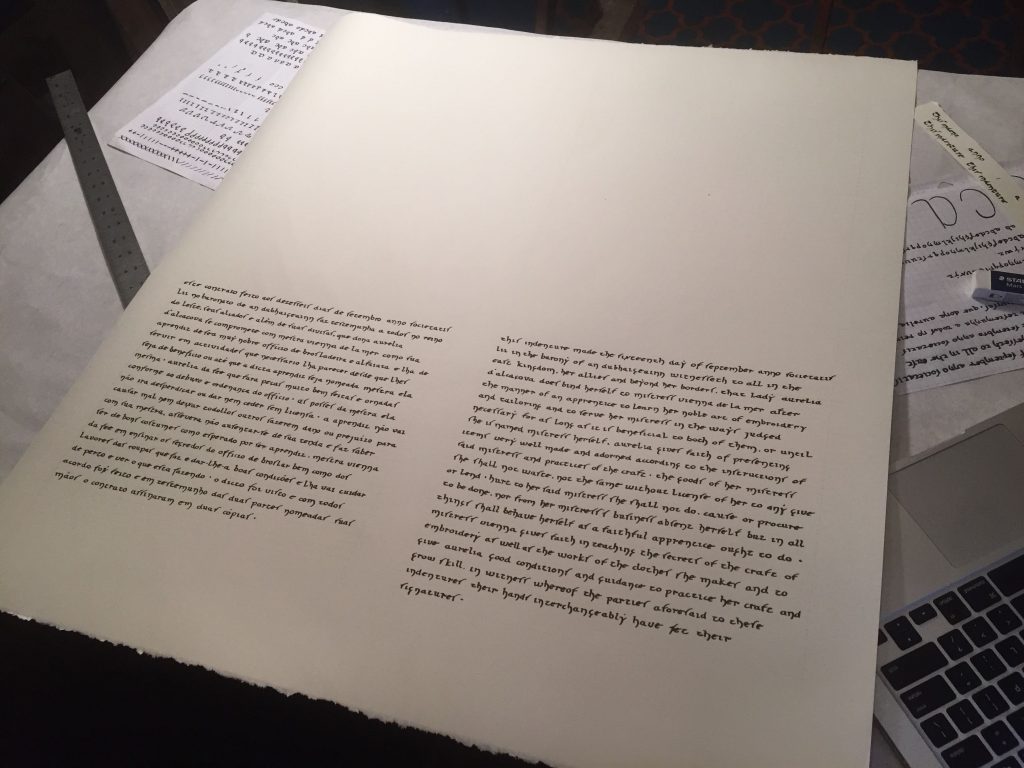 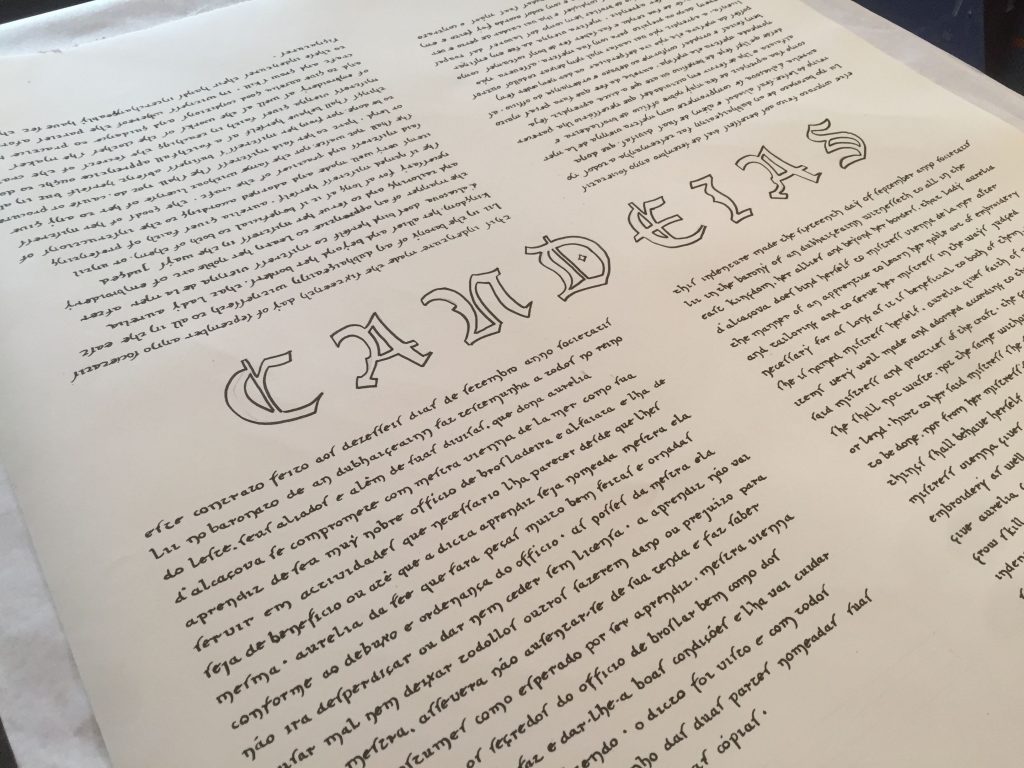 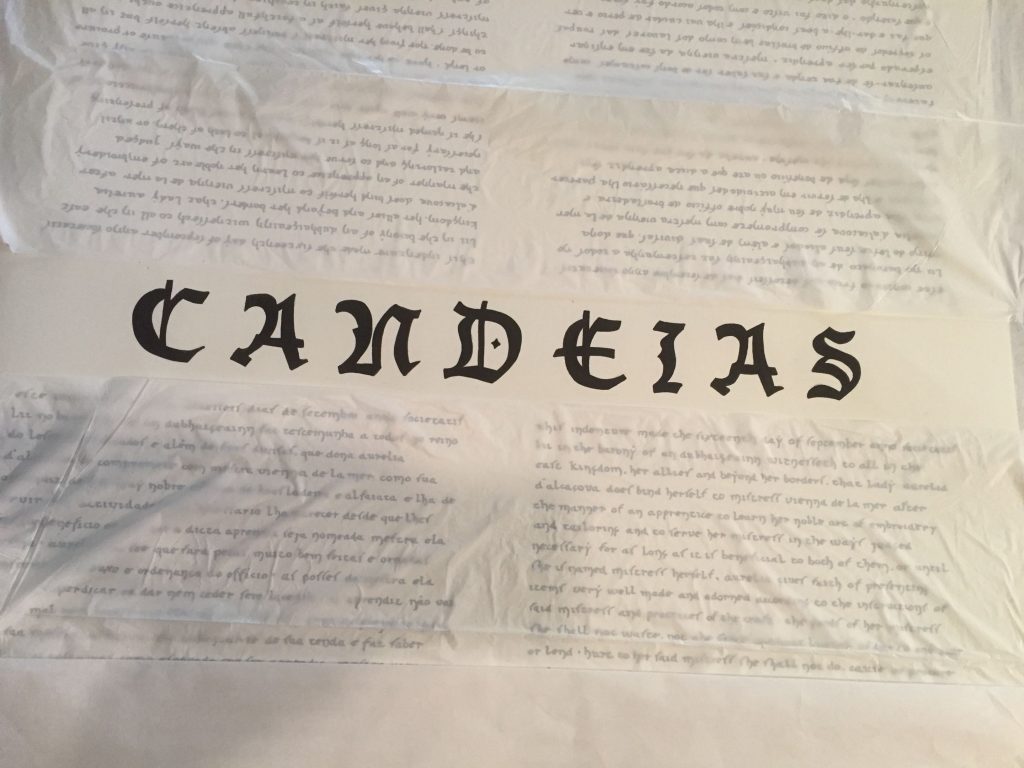